Here is a guest post by the wonderful Helen Hollick, award winning author and a great supporter of other writers.

Pirates have fascinated people for several centuries. They were the  terrorists of their age, these sailors of the early eighteenth century who went ‘On the Account’ hoping to gain a fortune  often led a short, but exciting life. Albeit one supplemented by rum and debauchery. Theirs was a harsh life, overshadowed by the presence of death by injury, illness or the hangman’s noose. But the lure of gold, the excitement of the Chase – and the freedom that life aboard a pirate ship offered, was worth the risk.

Helen has written a series of nautical Voyages based around her fictional pirate, Captain Jesamiah Acorne and his ship, Sea Witch, but her latest UK release in paperback is a non-fiction book – Pirates: Truth and Tales published by Amberley Press, which explores our fascination with the real pirates and those who are favourites in fiction. Today, Helen drops anchor for another interesting addition to her on-line two-week Voyage around the Blogs with a pirate or two for company…

The ‘Golden Age’ of piracy. The early 1700s, the Caribbean, the Spanish Main and the get-rich-quick lure of treasure. Not via the illusive map with ‘X marks the spot’, however, as very few pirates buried their ill-gotten-gains on deserted islands. Most of the profit from what they plundered from their unfortunate sea-going victims was frittered away in the brothels and taverns of Tortuga, Port Royal and Nassau, the most popular harbours to drop anchor. At least until the hangman came along. 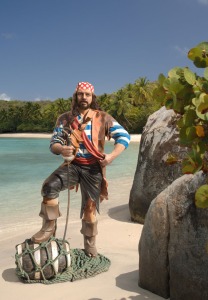 Not all pirates were successful, a few were downright inept, a couple retired with an amassed fortune, although even they had their hopes of a quiet life ashore as a Gentleman thwarted. Henry Morgan among them, (yes he of the Rum Label fame.) Morgan was, in theory, a privateer – which meant he had a government-granted license to plunder the Spanish, or whomever England happened to be at war with, so basically, the Spanish! Eventually, Morgan was made Governor of Jamaica and he raked in a nice little earner from taxing the goods the pirates brought in to sell. There was so much wealth in Port Royal – known for a time as the ‘wickedest place in the world’ – that even the humblest servant could afford to buy trinkets and luxuries. Morgan fell out of favour with the government though, and ended his days as a ‘has been’, although many mourners who remembered those bygone better days lined the route of his funeral procession. Several years later an earthquake struck Jamaica and an entire section of the town sank beneath the sea. Morgan’s grave along with it.

Captain William Kidd claimed he had been commissioned as a privateer, originally as a pirate hunter, although evidence against him showed otherwise and he was hanged at Wapping on the River Thames. The evidence seems circumstantial and was probably brought about because Kidd failed to bring home a fortune for his sponsors.

The crew of a ship known as Bachelor’s Delight amassed a good bit of wealth between them, but again their claim of being privateers was challenged and the wealth was confiscated by King William and Queen Mary. They put it towards building a college in Williamsburg, Virginia. Although not the original building, the William and Mary College is still there today – founded on pirate loot.

Several of the famous pirates we know of hanged: Charles Vane, ‘Calico’ Jack Rackham and his crew – although not the two women who sailed with him. Anne Bonney and Mary Read had their execution delayed because they were pregnant. Mary died in gaol, but we don’t know what happened to Anne. Stede Bonnet hanged, as did the captured crew who sailed with Edward Teach – Blackbeard. Teach himself died in a ferocious battle with the Royal Navy. After the fight, his corpse was found to have several gunshot and cutlass wounds. The body was decapitated then flung overboard, with the head displayed aboard as a trophy. He is said to haunt the area of the Ocracoke where he died. Apparently, his ghost is looking for its head.

Hanging, back then in the eighteenth century, was regarded as a family day out, a festival day where traders could guarantee good sales from the people who came to gawp at the victim: man or woman, pirate, thief, murderer – or alas a poor soul caught for ‘indecency’. Homosexual men were hanged along with the criminals, their sexuality regarded as a crime.

The one to be hanged was expected to put on a good ‘show’. Any quivering cowards were booed and pelted with detritus, those who had an air of swaggering bravado were cheered and heartily applauded.

Hanging was not a pleasant way to die; until the ‘long drop and short stop’ was introduced it could take anything up to twenty minutes to slowly strangle to death, a process quickened if family or friends hanged on to the victim’s legs and torso. And yes, that is where the term ‘hangers on’ comes from.

What the condemned wore was also important. Many a pirate headed for the gallows dressed in style and finery, with French lace at cuff and throat, plumed hat and colourful ribbons braided into the hair. The better quality these clothes and trinkets, the better advantage for the executioner, for he would later sell them for a handsome profit. One woman, Hannah Dagoe, arrested for stealing in 1763 cheated the hangman out of his extra money by stripping off her clothes as she was taken to the gallows, tossing bits of finery to the admiring crowd and arriving at the place of execution with very little on. She then further insulted the hangman by kneeing him in the groin as he put the noose in place and jumped out of the cart, breaking her own neck.

The rope itself, after it had done its job, would be cut into short lengths and sold as souvenirs by the hangman, who was more often than not a criminal himself, reprieved with the condition that he executed others. For this reason it is very rare to have the hangman’s name or identity recorded.

The sixth Sea Witch Voyage of my nautical adventure series (or the seventh if you count a prequel e-format novella, When The Mermaid Sings) featuring ex-pirate Captain Jesamiah Acorne is in process of being written. (Mid-2018, publication intended by early 2019.) It is entitled Gallows Wake. But which character is to face the threat of the noose, I am not revealing…

Trouble follows pirate captain Jesamiah Acorne like a ship’s wake. Can a white witch tame him, or will the sea or the noose claim him first?

Pirates: Truth And Tales published in paperback in the UK July 2018 and November 2018 in the US – but available for pre-order.

Sign up for Helen’s Newsletter and be entered for an annual prize draw.

One name ‘picked from the hat’ in December will win a £10/$10 Amazon gift voucher.

These links will take you to the Home Page of each blog host – Helen says thank you for their interest and enthusiasm! For exact URL links to each article go to Helen’s website:  www.helenhollick.net  which will be updated every day of the tour.

4th August: Tony Riches http://tonyriches.blogspot.co.uk/ An Interview With Helen Hollick (and maybe a couple of pirates thrown in for good measure?)

8th August: Pauline Barclay http://paulinembarclay.blogspot.com/ Writing Non-Fiction. How Hard Can It Be?

10th August: Christoph Fischer https://writerchristophfischer.wordpress.com/ In The Shadow Of The Gallows

Helen moved from London in 2013 and now lives with her family in North Devon, in an eighteenth century farmhouse. First published in 1994, her passion now is her pirate character, Captain Jesamiah Acorne of the nautical adventure series, The Sea Witch Voyages. Helen became a USA Today Bestseller with her historical novel, The Forever Queen (UK title A Hollow Crown) the story of Saxon Queen, Emma of Normandy. Her novel Harold the King (US title I Am The Chosen King) explores the events that led to the 1066 Battle of Hastings. Her Pendragon’s Banner Trilogy, set in the fifth century, is widely praised as a more down-to-earth historical version of the Arthurian legend. She has written three non-fiction books, Pirates: Truth and Tales, Smugglers in Fact and Fiction (to be published 2019) and as a supporter of indie writers, co-wrote Discovering the Diamond with her editor, Jo Field, a short advice guide for new writers. She runs the Discovering Diamonds review blog for historical fiction assisted by a team of enthusiastic reviewers.

Helen is published in various languages.

14 thoughts on “Guest Post: “In The Shadow Of The Gallows” by Helen Hollick”