Kate Glanville is a familiar face at my blog and at Llandeilo Literary Events. I’m delighted to announce that Kate will be reading from her wonderful novel “Stargazing” (click this link to a review of the novel) at Barr’s Jewelry at 11:30 am. 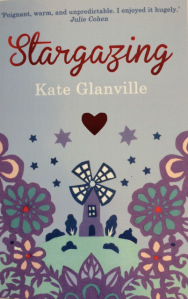 I’ve asked Kate to write a little something for the blog and here is a post she wrote:

Where I Write and How It Influences Me

When I started writing my first novel A Perfect Home (published by Penguin in the US 2012 and Accent Press in 2014) I took any opportunity to write, often writing long hand in a note book while I sat beside my youngest son’s bed waiting for him to fall asleep at night or sitting in the car waiting for my older children to come out of school or standing at the cooker waiting for the fish fingers to come out of the oven for tea. So desperate was I to get the words onto paper I would get up at five am and write at the kitchen table willing three small children to stay asleep till at least six o’clock. Consequently I was usually exhausted, late to pick the children up from school, many fish fingers were burned and I was extremely thankful to early morning CBeebies for its ability to distract the children while I grappled with that last illusive sentence before the pre-school rush began. Not surprisingly A Perfect Home revolves around a woman with three children, trying to juggle, motherhood and work and feeling as though she’s failing at both!

By the time I started my second novel, Heartstones (published by Accent Press 2014) the children were a little bit more independent and I’d learned to type on my lap top using two fingers, usually sitting at my kitchen table or in the garden – Welsh weather permitting!

The kitchen became increasingly chaotic as the children grew older and, for a few years the weather got wetter so I decided to try writing in the converted pig sty that for ten years had been my pottery studio. I have been producing hand painted pottery for over twenty-five years; it was and still is my day job – though to write full time has always been my dream. I had moved to a larger purpose built pottery studio a few months previously, leaving the pigsty empty apart from one of my kilns. One wet afternoon, when the children were especially noisy, I took my laptop into my old shed. It was warm and cosy from the kiln and as I sat watching the rain fall onto the Brecon hills that surround my home I realised I had found the sort of peace and quiet I had been longing for every time I started to write.

So, for a few years, my old pottery studio became my writing shed. Maybe that is why Heartstones is set in a pottery studio and revolves around the tangled romances and family secrets of two potters a generation apart. My third novel Stargazing is partly set on a Welsh hill farm, not too dissimilar from the little farms I could see in the distance through my window. It has a Welsh character in it called Nesta who reminisces about the lush green landscape of her childhood and is really just describing the view from I used to look out on from my window!

Sadly I had to leave my pig-sty last year and the children and I have been renting a pretty cottage in a beautiful National Trust owned park. Its cosy rooms and gorgeous garden are very conducive to writing. From my window I look out over a deer park and across to the ruins of a medieval castle. We live next-door to an imposing Georgian manor house that is meant to be the most haunted National Trust property in Britain and we have a resident peacock called Perry – he lives in the garden and knocks at the back door with his beak to be fed!

I’m working on my fourth novel which, surprisingly, is not set in a Welsh castle or a haunted house but in The Dordogne! It revolves around an ex-1980’s pop-star who’s reclusive life is turned upside-down when financial problems force her to rent out her house to holiday makers. The story unfolds over the course of a week. As I recently read over the first draft I realised that the weather gets progressively hotter throughout the manuscript. I think I subconsciously wrote about the heat in an effort to get warm myself.

Though our cottage is idyllic, it has no central heating and the winter was very, very cold. I wrote huddled by the log fire, wearing several thermal vests and my coat and my hat. It was a comfort to write about a stiflingly hot French summer! Often I went to bed to write with my electric blanket on full heat – still wearing my thermal vests and coat and hat and tried to imagine I was writing on a sun filled terrace with a warm breeze blowing through my flimsy summer dress.

At last the winter is over and I’m slowly divesting myself of my many layers – just down to one thermal vest now. I’m putting the finishing touches to my French romance and I’ve even been writing in the garden. As I look around at the bluebells drifting in-between the trees and Perry displaying his magnificent tail, my thoughts keep turning to a new story; a story set in a pretty cottage in Wales, nestled between a big house and a castle, with deer at the end of the garden, a peacock on the patio and, maybe, even a few ghosts…..

6 thoughts on “Welsh Wednesdays: Introducing the authors and speakers of the Llandeilo Christmas Book Fair Dec 9th: Kate Glanville: Where I Write and How It Influences Me”