Today I’m excited to blog an interview with one of my favourite blog guests, the very talented

Uvi Poznansky
Author of
Apart from Love
and
The Music of Us,
(Still Life with Memories series)
Welcome back Uvi. Please tell us about your new series, Still Life with Memories.
In my debut novel Apart from Love, I described a son, Ben, who comes back home, rebels against his father, and reveals a family secret: his mother, Natasha, previously a renown pianist, had succumbed to Early-Onset Alzheimer. My new novel, The Music of Us, takes Natasha a generation back, to the beginning of WWII, when she falls in love with her future husband, Lenny. 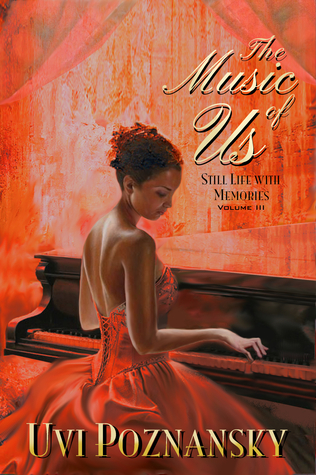 The story is told by Lenny. In 1970, he can no longer deny that his wife is undergoing a profound change. Despite her relatively young age, her mind succumbs to forgetfulness. Now, he goes as far back as the moment he met Natasha, when he was a soldier and she—a star, brilliant yet illusive. Natasha was a riddle to him then, and to this day, with all the changes she has gone through, she still is.
The series as a whole gives voice to several characters who are witnessing the same events, each one interpreting them from a different point of view, which gives rise to conflicts and eventually, to wonderful resolutions.
What is the meaning of the title of the series, Still Life with Memories?
This expression captures the longing we have for the past, which is symbolized by cherished objects. In my upcoming novel, The Music of Us, this expression is used twice, in two conversations between Natasha and Lenny. The first conversation is in 1942, when she longs for the home she lost and the vase of flowers that reminds her of the anniversary gift her Pa gave her Ma. And the second conversation, this time in 1970, is a reprise, which takes on a bitter sweet meaning, because at this time she is about to lose her memory, and therefore is in danger of losing who she is.
Please quote for us the first time this expression is used:
Once the crowd thinned out Natasha said, “So just like me, you too are going through a change.”
“I am.”
“For me, it feels as if I’ve been expelled not only from a physical building but also from my past, from my childhood.”
“Don’t I know it! It’s hard to think that someone else is taking your place.”
“I miss home. I miss every little thing, every object in it, because it reminds me of what happened, of little tokens of affection that come back to me, like the crystal vase, which Pa brought for Ma nearly ten years ago to mark their anniversary.”
“When I came to Summit for our first date I saw it, set there on the dining room table.”
“It used to capture the light so brilliantly, Lenny! I used to put fresh flowers in it everyFriday. D’you know the secret of a perfect arrangement?”
“Tell me.”
“It’s the spiral, where each new stem is slanted against the previous one. I would choose the best and biggest bloom for the center and arrange the other flowers at an angle around it, mixing the shades of white, pink, and purple and creating a wonderful dome of flowers.”
“Oh, Natasha, I can just imagine it.”
“Then I would stand back and enjoy looking at it, thinking what a beautiful painting it would make, with the lovely shapes of orchids, spray roses and Asiatic lilies brushed upon the canvas.”
“What would you call it?”
“Still life, with memories.”

And just for comparison, please quote the second time:
I put my pants on, go to the kitchen, fill a small pot with water and bring it to a boil for the eggs. Meanwhile I squeeze grapefruit juice into two glasses and wait for the two slices of bread to pop out of the toaster. I set two plates on the table, one each side of the crystal vase. It is the same vase her Pa bought for her Mama to mark their anniversary a generation ago.
I had been too drained to think about it until last night, when on a whim I bought bouquet of fresh flowers in lovely hues of white, pink, and purple. Why did I do it? Perhaps for old times’ sake. By now I have stopped hoping to surprise my wife with such frivolities, because she pays little attention, lately, to the things I do. So for no one in particular I stand over the thing, rearranging the orchids, spray roses, and Asiatic lilies as best I can, to create an overall shape of a dome.
And then—then, in a blink—I find myself startled by a footfall behind me. A heartbeat later I hear her voice, saying, “Lenny?”
I turn around to meet her eyes. My God, this morning they are not only lucid but also shining with joy.
In a gruff voice, choked, suddenly, with tears, I ask her, “What is it, dear?”
And she says, “Don’t forget.”
“What, Natashinka?”
“I love you.”
Spreading my arms open I stand there, speechless for a moment. Without a word she steps into them. We snuggle, my chin over her head. She presses it to my bare chest. I comb through her hair with my fingers. And once again, we are one.
Then she points at the vase.
“For you,” I say. “Looks like some old painting, doesn’t it?”
“Still life,” she whispers. “With memories.”
Then Natasha lifts her eyes, hanging them on my lips as if to demand something of me, something that has been on her mind for quite a while. Somehow I can guess it. She is anticipating an answer, which I cannot give.
Instead I kiss her. She embraces me but her eyes are troubled, and the question remains.
“Without the memories,” she asks, “is it still life?”
Buy Links:
The Music of Us ebook
Apart from Love ebook print audio
Rise to Power ebook print audio
A Peek at Bathsheba  ebook print audio
The Edge of Revolt ebook print
More posts on this blog about Uvi:
Rewiew of A Peek at Basheeba
Interview
Blog post about the Perils of Bibilical Inspiration
Author Links:
Blog
Facebook author page
Amazon author page
Goodreads author page
pInterest
@UviPoznansky

Here is a review from Goodreads about a different book in this new series:

This book goes hand in hand with the author’s “My own Voice” and the two work very well as a set.
The core of the story is Lenny’s marriage to his second wife, Anita, a much younger version of his ex-wife Natasha, who has early onset Alzheimers. While one book follows the narrative of Anita, we now hear the story from Ben’s side, who is Lenny’s estranged son.
His observations cast a new light on the situation. His perspective, aided by letters from his mother, bring new revelations and peel further layers of the family. The author also uses tape recordings in the book, making this a very accomplished piece of story telling. While I don’t often like ‘clever’ or constructed plot devices, hjere it works extremely well.
The author has a unique sharp and poignant writing style and with the change of perspectives she gives the characters further depth. Great writing, a fascinating premise and wonderful insight in human nature make this a read very worth your time.

Here is my review of APART FROM LOVE

11 thoughts on “Interview with Uvi Poznansky, author of “Apart from Love” and “The Music of Us””