I’m delighted to present my review of Richard Zimler’s latest book today and share a little insight from a conversation with him about the book. The book is already on pre-order on Amazon and a great accomplishment.

“The Gospel According to Lazarus” is an accomplished and ambitious novel. In this re-telling of Jesus’s last week from the perspective of a child hood friend whom Jesus resurrected from the dead, we’re looking at Jesus, faith, religion and history with new and challenging eyes. Whatever religion – if any – you follow there will be something in the teachings of Jesus that can touch your heart. While I personally would not describe him as the son of god, a lot of what he said was an important message and I’m glad it found itself into humanity.
It’s a credit to Zimler’s writing that I devoured a book about a biblical theme (as I feel that I have been exposed to too much of it in my youth).

Historically and biblically well researched this novel is based on the traditional gospel while braving to deal with some missing gaps, logical questions arising from the story and the much appreciated human factor that religion all too easy denies those idols it intends to praise.
Why was Lazarus resurrected – how did people respond to him and Jesus because of it and what is the point of this in the context of the bible? While we all believe different things about the afterlife, why was Lazarus not given a chance to tell us about that?

Seeing what has become a Christian story from a more contemporary Jewish angle helps us understand events in a way that cannot be achieved when reading scriptures exposed to millennia of intended and unintended bias. To me, what Zimler has written makes the people and miracles far more believable than the way they have found themselves into the Bible.

I remember a hugely inspiring and thought-provoking conversation I once had about Jesus as a Jewish rebel rather than a virgin-born King and this book makes many similar cases, without being as controversial or provocative as my review may make it sound.
To me, the point being made here is not to discredit religion but to see the actual story and person of Jesus with some of the gold and glitter removed; and  to see the beautiful message from Jesus, untarnished from the dos and don’ts of the preachers. 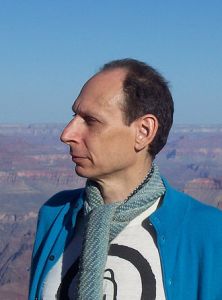 “The idea for the novel came Richard after a repetitive dream in which his brother – who died of Aids in 1989 – came back to life but was greatly diminished and profoundly mournful.  This dream reminded him of the story of Lazarus from the Gospel of John.  After he re-read the Gospels, he started researching daily life in the Holy Land at the time of the New Testament and paid special attention to the tradition of Jewish mysticism that Jesus would have likely followed.  He became fascinated with the idea of writing the book from the point of view of Lazarus himself and of characterizing Jesus as a Jewish mystic (of giving him back his Judaism, so to speak).  To try to free readers from their previous assumptions about these two important men – and to free them from Christian iconography – he uses their Hebrew names in the novel: Eliezer ben Natan and Yeshua ben Yosef”.

One of the biggest privileges of my writing life has been encountering humble yet incredibly talented authors and becoming friends with the people behind truly inspiring books.

I came across Richard Zimler‘s hit “The Last Kabbalist of Lisbon” by chance via a google search and have devoured his work ever since. Few people write with such delicate humanity and sensitivity, always think of others and enchant with prose as he does. I have read all of his work and am a huge fan.

I had the honour of meeting him on social media and in Lisbon last year and now am over the moon to see his latest work “The Gospel According to Lazarus” finally published in English. I received the honour of a preview copy from the publishers and am over the moon. I’m already far into the novel and can’t wait to post my review.
Such a great idea to pick Lazarus as narrator is all I can say for now. Thanks Richard and team!