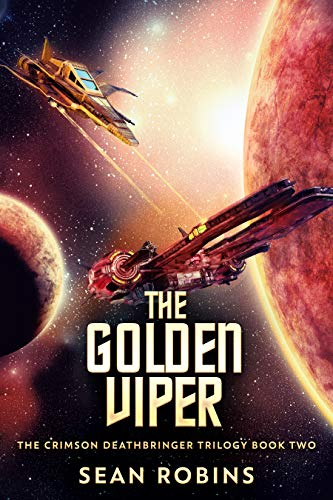 Following my enthusiastic review of Book One in the series  (The Crimson Death Bringer)
here are my announcement of Book 2 going on pre-sale and my pre-release review – thanks to the author’s preview copy.

You will all know that I rarely dive into science fiction reading but I saw the author’s quirky tweets and got into the series that way.

THE GOLDEN VIPER is a bit more serious than the first and the novel gets you more of the sci-fi action with more focus on the actual science fictions story, the fighting scenes, the different species and other fantasy elements.

A surprise attack of unexpected dimensions forces our heroes to think quickly on their feet and come up with solutions how to fight off the invaders. All the more disturbing is the re-appearance of a character previously thought dead. From there the action never lets up and keeps you turning those pages.

The novel cleverly starts with a dramatic scene taken out of the chronological sequence to kick-start the tension and then tells the story of the events leading up to it.

Robins again uses in-jokes and humour which makes the story very enjoyable. The characters are very likeable and the plot is full of tension and well thought-through.

This was again very enjoyable and something I’m sure many people will have great fun reading.
Check it out.

Despite their crushing defeat on Earth, the Xortaags are back, and with a genius plan that can be the brainchild of only one man in the galaxy, they’ve conquered the Akakie homeworld.

Not being the forgive-and-forget types, the Xortaags have chosen Earth as their next target. Moreover, if they have enough time to reverse-engineer all the advanced technology they found on Kanoor, they will rule the universe forever. Now it’s up to Jim, Kurt, Oksana and Tarq to save not only humanity but also every single sentient species in the universe.

You thought the stakes were high in The Crimson Deathbringer (with Earth conquered and 700 million people killed)? You ain’t seen nothing yet!