Time for a little historical romance from author Shehanne Moore with her latest release on Pre-Order at a special price for 13th September – O’Roarke’s Destiny (Cornish Rogues Book 1). 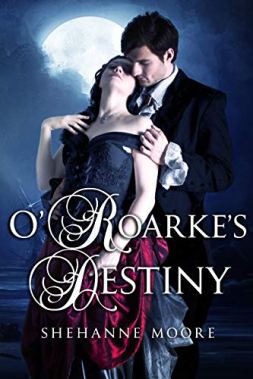 Once he’d have died to possess her, now he just might…

Beautiful, headstrong young widow Destiny Rhodes was every Cornish man’s dream. Until Divers O’Roarke cursed her with ruin and walked out of Cornwall without a backwards glance. Now he’s not only back, he’s just won the only thing that hasn’t fallen down about her head—her ancestral home. The home, pride demands she throw herself in with, safe in the knowledge of one thing. Everything she touches withers to dust.

He’d cursed her with ruin.

Now she’d have him live with the spoils of her misfortune.

Though well versed in his dealings with smugglers and dead men, handsome rogue Divers O’Roarke is far from sure of…