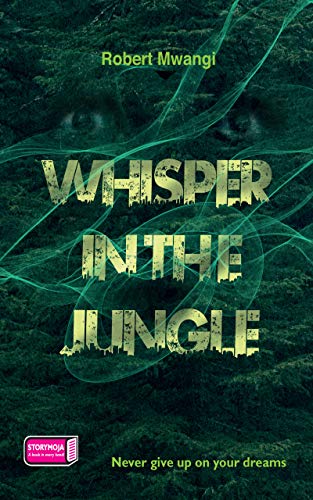 I’ve read an earlier version of this book by Robert Mwangi and enthusiastically reviewed it on this blog and conducted  an interview with the author. Now a publishing company has picked the book up and after a make over released it.

This is quite a thrilling ride through a young man’s short time before planning to leave Kenya for a scholarship in America. While his excitement about a brighter future and a love interest lighten his life, there are darker tones with disappearances in the nearby jungle. These force him into action despite the tight timing.
Interspersed into this suspense are scenes of great cultural interest to this reader: rituals, philosophical reflections on the tensions between heritage and modern living and old beliefs being tested in the 21st century.
Above this, the young man’s coming of age is reflected in the theme of finding out the true meaning of his traditional name.

“Whisper in the Jungle” is a very enjoyable and engaging read that made me look forward to the next book and the glimpse into the character’s next adventure.

Deep in the African jungle where even the bravest are afraid to venture, lies a truth that will propel James through his probable American journey, if he can come out alive. James an African lad has been awarded a soccer scholarship to go to America and becomes the envy of his village. His girlfriend Janny is however skeptical of what a long distance relationship can do to love. But when Janny vanishes, James plunges into the mysterious forest at the risk of his life and his American Dream. Love transcends all.

5 thoughts on “Review: “Whisper in the Jungle” by Robert Mwangi”