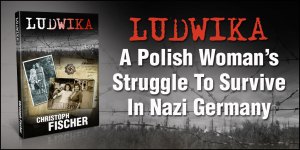 the story about a Polish slave worker in Germany, based on real events. (For more on the book scroll down to the end of the reviews.)
“I found Ludwika to be an interesting, brave and loving woman. To realize that she is a real woman makes her storyline more amazing!”
***

“I found this to be very interesting. Being unfamiliar with the living conditions of the day , I was intrigued with her ability to survive such a terrible experience.”

“A compelling story of life in the Reich for a Polish woman
I stayed up late to finish this book. Christoph Fischer wove compelling fiction around the facts of this story. Polish Ludwika believes she will help her family survive by leaving Poland to be with a German officer. She is continually in worse situations, often related to her choices when it comes to male partners. I would have given it five stars, but I thought the ending was rushed. I look forward to reading more from this author.”
Glad I read on
I almost gave up early on this book. The writing struck me as very flat and journalistic, not so much like a novel. The story, however, was extremely interesting, and I am glad I kept reading. Definitely worth the time.
5.0 out of 5 stars
A story of strength and resilience

Ludwika was a fascinating story of a Polish woman’s journey from her home on a farm in rural Poland to various places in Germany. It is based on a real person and includes many details about her life.

I did not know that much about the plight of the Polish people when Germany invaded Poland in October 1939. It was quite an eye opener for me to discover how difficult it was for the Poles during the war. Previous WWII literature I have read has largely either been factual in its nature or focused on the horrors experienced by Jewish people.

Right from the beginning of the book, Ludwika shows herself to be a woman of innovation and resilience. She is the one whom her father has left in charge of his farm, her mother and her sibling, when he left to help defend Poland against the German army.  It is also quickly apparent that Ludwika is a woman of unusual beauty and who quickly attracts the interest of men. Soon after the arrival of the German soldiers, Ludwika catches the eye of Manfred, an SS officer. His interest results in a measure of protection for Ludwika’s family and in order to maintain this protection, and do what she believes to be in the best interests of her family, Ludwika agrees to move to Hamburg as Manfred’s housekeeper. This moves requires that she leave her young daughter, Irena, behind her. I thought Ludwika’s anguish at leaving her family and emotion turmoil as to what would be best for them all was very well expressed.

Ludwika is very popular with children and they really like her quickly. During her journey to Hamburg she meets up with a young and wealthy German woman with four children. Ludwika helps to keep the children occupied during the train journey and befriends the mother, who has strong Nazi ties. This relationship changes the course of her life.

As things deteriorate in Germany as the war progresses and the lives of Poles and other foreigners become much difficult and precarious, Ludwika finds her situation in Germany becoming more and more difficult.

There are a number of love interests and relationships in the book which make the reader all the more aware of Ludwika’s desperate and vulnerable position. Despite its themes, I found Ludwika to be a positive reading experience which emphasized how, despite difficult circumstances outside of her control, Ludwika’s hard working and resilient nature and kind and generous spirit prevail and help to open doors for her that would otherwise have been closed.

I rated Ludwika five out of five stars.

Beetleypete
VINE VOICE
5.0 out of 5 stars  A gripping historical novel.
Once again, Fischer shows such talent for bringing history to life, with this based-on-fact novel about the survival of a young Polish woman during WW2. Taking the small details he could find, the author weaves them into a story by adding fictional characters, delivering a page-turning experience that showcases his style and skill.
From a peaceful life on a Polish farm, to near slave labour in far-off Germany, we follow the trials and tribulations that beset our young heroine during the long years of that war. And to round it off, we also get to find out what really happened to her, later in life.
This combination works so well, giving us completely believable characters, authentic locations, and set around the cataclysmic events that rocked Europe from 1939, until well after the end of hostilities. Recommended unreservedly, this is a book for everyone to read.
5.0 out of 5 stars Five Stars
Format: Kindle EditionVerified Purchase
Enjoyed this historical read.
5.0 out of 5 stars
A very enjoyable and thought provoking read.
Format: Kindle EditionVerified Purchase
Five star rating as I felt it was a very interesting topic and well written. It was a very sad story but the relationships between the characters during this terrible time was very inspiring.
Janet Gogerty
5.0 out of 5 stars A glimpse into the many unknown stories of war.
Format: Kindle EditionVerified Purchase
This is written in the third person and in some ways stands back a little from Ludwika’s life, but we still feel we know her well and the style suits the telling of a story based on real lives. The panorama of the Second World War is so huge we can never take in the whole story. Most of us look at those years from the viewpoint of our own country and our own parents and grandparents.Here is a fascinating insight into the lives of ordinary people who did not have the benefit of hindsight or the overview of those in power. Ludwika makes her own decisions, but is also at the mercy of events. Along the way she meets people who are not stereotyped good or evil, often neither enemy nor friend. Sharing Ludwika’s war we also get glimpses of so many untold stories.

It’s World War II and Ludwika Gierz, a young Polish woman, is forced to leave her family and go to Nazi Germany to work for an SS officer. There, she must walk a tightrope, learning to live as a second-class citizen in a world where one wrong word could spell disaster and every day could be her last. Based on real events, this is a story of hope amid despair, of love amid loss . . . ultimately, it’s one woman’s story of survival. 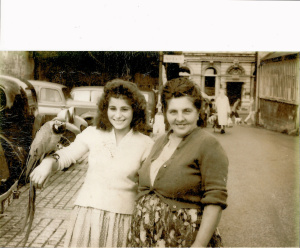 Editorial Review:”This is the best kind of fiction—it’s based on the real life. Ludwika’s story highlights the magnitude of human suffering caused by WWII, transcending multiple generations and many nations.

WWII left no one unscarred, and Ludwika’s life illustrates this tragic fact. But she also reminds us how bright the human spirit can shine when darkness falls in that unrelenting way it does during wartime.

This book was a rollercoaster ride of action and emotion, skilfully told by Mr. Fischer, who brought something fresh and new to a topic about which thousands of stories have already been told.”

18 thoughts on “Recent Reviews for LUDWIKA”