As I may have mentioned my medical thriller The Healer will be part of a multi author, charity box set DO NO HARM . In the run up to the release I will post excerpts from included works and interviews with participating authors. Today an excerpt: 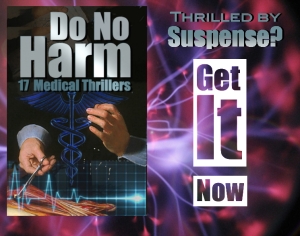 Do No Harm: Kill Switch by Dan Alatorre @savvystories

The murderer who called himself The Greyhound pulled a black ski mask over his face and stared at the ornate door of his next victim’s house.
On TV, cops and angry boyfriends can always kick a door open. In real life, it’s a little more complicated than that.
He hefted the 40-pound battering ram to gage its balance. According to the website that sold them, these heavy steel rams replaced a swift kick for police officers around 1975, and had been reliably opening the doors of stubborn perpetrators ever since.
Hit the knob with it straight on, and it will do the rest.
Taking a deep breath, he rubbed the knot growing in his stomach. He stepped away from the door and glanced through the large bay window, eyeing the fat old man as he ate at the table. The overhead chandelier cast a warm yellow glow over the dining room walls, spilling onto the yard outside in a misshapen rectangle.
The man inside carved a tiny slice of something on his plate, gently lifting it to his mouth, the fork upside down like European royalty. Good posture, too. No doubt that was the way Dr. Faustus Braunheiser demanded the students at Wellington Academy to eat, all prim and proper. Students watching from their tables would see the rigid old man operating as any proper headmaster should, a perfect example of stuffy grace and tedious dignity.
But tonight, the old man dined alone.
No gawking teenage boys in matching shirts and ties, no suck up faculty. And best of all, no family members.
That’s no way to celebrate your birthday, doctor.
A breeze tugged at his collar and brought the stench of the bay at low tide. He peered at the tall hedges lining the driveway.
Thank goodness for privacy.
The killer reactively went to wipe his hand on his pants, stopping when he remembered the latex gloves he wore. After patting the butt of the big revolver strapped to his belt, he regripped the 40-pound steel battering ram. Its two handles allowed it to swing like a giant pendulum, and according to the website, the concentrated impact at hand speed was somewhere in the vicinity of 6,000 pounds per square inch.
More than enough to do the trick.
He took a deep breath, straining to guide the tip of the thick black ram to the shiny brass knob, but not touch it. He held it there for a moment, lining up his shot, then he let the ram swing backwards. The momentum of its short, stubby mass wanted to carry him backwards with it, off the ornate front porch and down the majestic home’s marble stairs, but he forced his arms and shoulders to contain the pendulum.
When the battering ram reached the peak of its backwards arc, he brought it forward once again toward the door.
One.
Exhaling hard, he rocked the ram backwards again. A bead of sweat rolled past the bandage and down the side of his face.
He swung it forward again, nearly touching the knob.
Two.
The ram arced backwards one last time. With a grunt, the Greyhound squeezed the steel handles and gritted his teeth, heaving the ram towards the door knob.
Three.
The impact sent a jolt up his arms and a thunderclap that boomed down the doctor’s long driveway and past the vintage Jaguar parked there, before fading into the night. As the door knob disappeared, a cloud of splinters took its place. The momentum of the ram carried Greyhound into the door frame, the ram disappearing up to the handles inside the thick wooden door.
He yanked the heavy steel tool a few times to get it free, then dropped it over the mansion’s stone porch rail and the into the manicured bushes. It landed with a thump in the thick mulch. The massive front door stood, cracked in several places and with a big hole where the knob used to be, but it inched open.
The Greyhound raised his foot to do the rest. Kicking the door, it swung open and crashed into the mahogany-paneled wall. The old man at the table was already on his feet, his eyes wide and his mouth half open with the next tiny bite of his elegant birthday dinner. He stormed toward the entrance of his home. “What do you think you’re doing? Who are you? Get out!”
Heart pounding, the Greyhound pulled his large gun from its holster and pointed it at the old man. “Shut up and sit down, Dr. Braunheiser.”
The headmaster stopped in his tracks, jaw agape. He slowly raised his hands.
“You don’t remember me, do you?” The Greyhound said.
Excerpt from Kill Switch by Dan Alatorre
Included in Do No Harm

Preorder it now:
Do No Harm
Nook ★ Apple ★ Kobo

7 thoughts on “Do No Harm #excerpt: Kill Switch by Dan Alatorre @savvystories”

Leave a Reply to Smorgasbord - Variety is the Spice of Life. Cancel reply