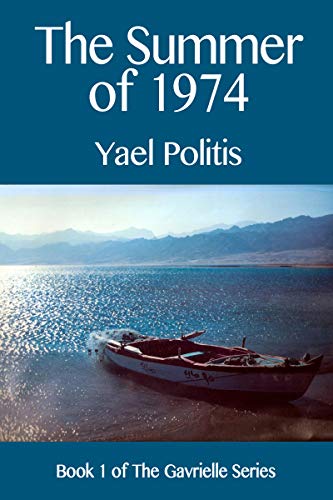 I’m delighted to welcome back another much respected writing colleague of mine:  Yael Politis.
I had the pleasure of reading her latest book in advance and here’s my review:

“The Summer of 1974” is a rich and rewarding read, the beginning of a new series by one of my favourite authors, Yel Politis. The novel is on the surface the attempt by a young Jewish woman to discover the identity of her father. Her mother only knew him briefly, died in child birth and left no name. Gavrielle’s search for her roots in a country younger than her often is poignant and stirs the emotions. But there is much more to this: while this search demands reflection and bravery proceedings get complicated by her romantic involvements as much as by the military conflicts of the time.
So in a way this is also the story of Israel and the six day war as experienced by our heroine Gavrielle, her friends and family.
Due to the fact that Gabrielle works for the Israeli Intelligence Service we find a lot of fascinating information and lesser known facts about the complexities and the historical and political background of the military conflicts with many minor and major details I never had.
I look forward to the sequel and the next chapter in Gavrielle’s story. An insightful and very enjoyable read.

Here you can read Chapter one on Yael’s website:

Or get the book on Amazon

I grew up in Dearborn, Michigan and attended the Universities of Michigan and Wisconsin. (Back then I was Janet Lewis.) When I was a student I spent two summers in Israel and ended up coming back after I graduated. I still spend a lot of time in Michigan, but have lived all my adult life in Israel. I have worked as an agricultural worker, waitress, secretary, librarian, kitchen worker, Administrative Systems Analyst, English teacher, Hebrew–English translator, English editor, and Technical/Marketing Writer. My last (and longest-held) job was as a Proposal Writer for Israel Aerospace Industries.

Decades ago I began writing on my old Smith-Corona typewriter, but, fantasies aside, I considered it no more than a hobby. Until the day I received an email from Holland Park Press of London. “We want to publish your book,” it said. I had been participating in a writers’ workshop run by the London Arts Council where they spotted The Lonely Tree. So that’s how I came to have a debut novel. By the time I retired from IAI, self-publishing was really taking off and I decided to have a go at it for the three books of The Olivia Series.