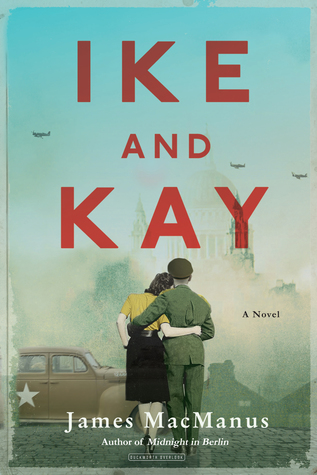 “Ike and Kay” by James MacManus is the fictionalised account of the war time affair between married General Dwight Eisenhower and his assistant-turned-driver Kay Summersby; an affair which started in 1942 and came to a final end after the war.
I didn’t know this detail about Eisenhower until I read the blurb for this book and found the story particularly interesting and well-told. The background story is immaculately researched and fascinating, too: from Eisenhower’s first arrival in Britain, his rise in rank to his war involvement in North Africa and Berlin, I learned a lot of minor and major detail about the military operation and about the person Eisenhower.
Like other readers, I didn’t feel the love between the main characters, though, maybe because I didn’t feel it myself; this as a caution to those reading it for the romance aspect. That caveat aside, it is worth reading as work of historical fiction and will please those who appreciate detailed and well-researched war stories.

In his latest historical novel Ike and Kay, acclaimed author James MacManus brings to life an unbelievably true and controversial romance and the poignant characters and personalities that shaped the course of world history.

In 1942, Kay Summersby’s life is changed forever when she is conscripted to drive General Eisenhower on his fact-finding visit to wartime London. Despite Eisenhower’s marriage to Mamie, the pair takes an immediate liking to each other and he buys Kay a rare wartime luxury: a box of chocolates.

So begins a tumultuous relationship that, against all military regulation, sees Kay traveling with Eisenhower on missions to far-flung places before the final assault on Nazi Germany. The general does dangerously little to conceal his affair with the woman widely known as “Ike’s shadow,” and in letters Mamie bemoans his new obsession with “Ireland.” That does not stop him from using his influence to grant Kay citizenship and rank in the US army, drawing her closer still when he returns to America. When officials discover Eisenhower’s plans to divorce from his wife they threaten the fragile but passionate affair, and Kay is forced to take desperate measures to hold onto the man she loves . . .

Based on the scandalous true story of General Eisenhower’s secret World War II love affair, Ike and Kay is a compelling story of love, duty, sacrifice, and heartbreak, set against the backdrop of the most tumultuous period of the twentieth century.

James MacManus has worked in the newspaper business for 46 years. He is currently the Managing Director of the Times Literary Supplement.

He is the author of On the Broken Shore (The Language of the Sea, UK edition), and Ocean Devil: The Life and Legend of George Hogg which was made into a film starring Jonathan Rhys Meyers

His latest book, Black Venus, is a vivid novel of Charles Baudelaire and his lover Jeanne Duval, the Haitian cabaret singer who inspired his most famous and controversial poems, set in nineteenth-century Paris. Duckworth will publish the UK edition of Black Venus on February 27th 2014.The UK edition follows the successful launch of the novel in the US by Thomas Dunne books of New York.