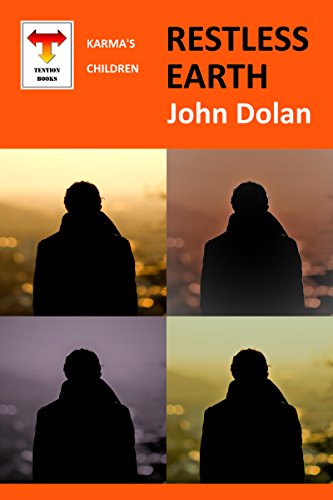 I’ve been waiting for the latest John Dolan book for some time and am delighted to finally be able to report back on it. I was confused to see the series link referring to “Karma’s Children”. His previous work was part of the “Time, Blood and Karma” series. And as this suggested, there are some similarities between the series, including some of the characters, but there is also the beginning of a new direction, including previously unknown protagonists.

I’m pleased to say that private investigator David Braddock returns in this excellent, dry, witty and clever ‘whodunnit”. Braddock is a fantastic character; both ambiguous and always entertaining. There are some serious undertones wrapped into the twisted and often humorous thriller; Restless Earth to me is a mystery as much as it is a running commentary on humans all over the globe, from Thailand to Britain. As the blurb of the book so truthfully puts it:

“It’s not always easy to tell the good guys from the bad guys. And sometimes, there are no good guys.”

As I said , Braddock himself is an ambiguous character. Dolan’s four main characters and plotlines are all excellent creations, as well as the minor characters. From the first conversation between Braddock and the memorable Nang until the end you have excellent dialogue, sharp writing, intelligent plotting and everything perfectly woven into each other – which makes for a rewarding and rich reading experience.

For fans of his previous work (and fans of the genre in general) Dolan has inserted some great insider jokes and literary references. Not a chapter goes by where you won’t smile and think.

I can’t go into the plot as I do not want to give away the game for those who want to read previous books. Trust me, this is worth reading. Dolan and his books are literary highlights for me every year. Highly recommended.

A wind is howling around the skyscrapers of New York, through the battlefields of Iraq, and into the bustling streets of Bangkok. It carries with it the fates of these four men: men bound together by chance and history.
Which of them – if any – will survive the tempest?