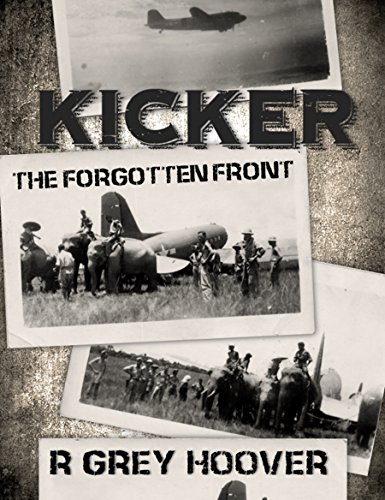 Today I’m delighted to feature a remarkable book by R Grey Hoover, which has been re-released with a fantastic new cover. I came across the book and reviewed it a while back after meeting Grey in a writer’s group. To this day I still remember the book very vividly and am so pleased that Grey, who’s such a dedicated supporter of other authors, finally is pushing his own work a little harder, because it’s absolutely worth the exposure. Here’s my review:
“KICKER (The Forgotten Front): A World War 2 thriller based on actual experiences and official military aviation history in the China, Burma and India theater” by R. Grey Hoover is an extraordinary read about air force life in Burma during WWII.

It focuses on Sam Huber (and his wife Eleanor home in Pennsylvania) from his first days of training through his various stops on the way to armed conflict in Burma.
Sam and his friends illustrate the regular soldier’s life, not just the super heroes as featured in Hollywood films about the time. They have embarrassing moments during the physical exams, they run out of petrol and have a huge variety of close calls and successes, too. It made them much more realistic and likeable.
The story is not just limited to Burma; Sam stops in Africa and India on the way and with him we also get to know a lot about the situation for soldiers in these areas.
With much research and an amazing amount of factual knowledge about flying, aircraft technology and weather conditions as perceived by air force personnel this book is packed with amazing information and moving insight and worth reading for many reasons.

Based on the actual experiences of American soldiers during World War II, KICKER features the lives of those who fought in the China, Burma and India Theatre, also known as CBI. Written by R Grey Hoover, this book showcases one of the most unheard of forces that fought in conjunction with British and Chinese Allied air and land forces during the Second World War.

Compelling, insightful and moving, this book tells the story of a family caught in the throes of war. It pays tribute to the bravery of a family with a 165 year tradition of service to their country. It reenacts the understated heroism of valiant men who were sent off fourteen thousand miles from their homeland to battle all the harsh elements of nature and the life-threatening attacks of hostile enemy forces. In the hopes of reminiscing his father’s life in the military, Grey writes this historical novel to bring to light the significant efforts of war veterans whose struggles may not have been recognized by many.

Little is known about the CBI Theatre. This was even referred to as the Forgotten Front due mainly to the fact that the men who fought in this zone had received very little amount of supplies and support from the government. The soldiers did not have enough provisions and had limited supply of rations. A man named Sam Huber was a part of this group. In his son’s effort to bring to life his father’s accomplishments not only as a soldier, but also as a family man, Sam’s story is told in this powerful work that will inevitably stir readers.

KICKER inspires readers to appreciate and honor the courage, strength and endurance of war veterans who risked their lives and the welfare of their families in order to fight for the very freedom that is now being enjoyed by millions

Tell us a little about yourself and your book.

I am retired from the Pennsylvania State University where I spent a long and successful career in the IT field.  Since retiring, I have done a lot of traveling and have become quite successful in the field of wood carving. I have also written a book titled “Kicker”, which is a historical novel based on the experiences of my family during World War II. In addition, I founded the Author’s Social Media Support Group (ASMSG) to bring together authors who are interested in helping each other.

How did you come to writing in the first place?

After I retired, I wanted to document my father’s wartime experiences for my family. However, the more I learned about his service and others in the China-Burma-India theatre, I decided to write a book to shed more light on that little known theatre of the war and to honor the men and women who served there.

How did you choose the actual characters for the story?

The majority of the characters in the book are based on my family members and veterans I met or learned about during my research on the book.

Who is your favourite character and why?

I would have to say my favourite character is Sam, the main character in the book.  He is my favourite because he is based on my father who I admired and respected very much.

Are you like any of the characters yourself (and how so)?

I am like the character Billy because he’s based on my life during that time.

What was the most fascinating aspect in the research and the writing for you?

The most fascinating part of my research was actually meeting and befriending many World War II veterans.

How did you research for the book?

I spend over 7 years researching the book. I attended meetings of CBI veterans where I made many new friends and was able to interview a lot of them.  Sadly, those CBI veteran groups are now largely disbanded because their numbers have dwindled. I also did a lot of research through military records centers and publications available online.

Did you have any say in the cover art and how was that process?

I had a lot of say on my cover art. I provided the publisher with a picture of my father in a C-47 cargo plane and they suggested it be placed over an image of a World War II ration booklet. I was very pleased with the job that was done.

I spend a lot of time with the administrative aspects of the ASMSG group. When I am not doing that, I like to travel and pursue my wood carving interests.

Which are your favourite books and authors?

Which indie writers can you recommend?

The ASMSG group has a large number of indie authors that are very talented.

What else would you like us to know about yourself, your books and the ASMSG?

Having a successful book is very difficult. Through the ASMSG group, I hope to help as many authors as I can become successful.