Further to my recent “New-Release-Posts”
I proudly present you my first ever Mystery Box Set:

“The Fraud or Miracle Trilogy” – available in paperback and available for pre-order on kindle / delivered wirelessly to your kindle on November 1st.
The box set contains my brandnew thriller, “The Sanctuary on Cayman Brac” which will also be released separately on November 1st.

Get it from your Amazon website via these universal links:
http://smarturl.it/FraudorMiracle
http://bookShow.me/B076N771K4

The Trilogy comprises three novels that explore – both, seriously and light-heartedly – the conflict between facts versus faith and trust versus doubt: The Healer (released 2014), The Gamblers (released 2015) and “The Sanctuary on Cayman Brac: Key to the Truth” (to be released 15th November 2017) 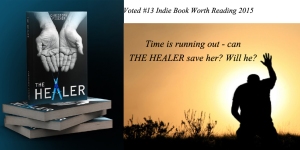 In “The Healer” advertising executive Erica Whittaker, diagnosed with terminal cancer, seeks help from retired, controversial healer Arpan. He has retired for good reasons, casting more than the shadow of a doubt over his abilities. So begins a journey that will challenge them both as the past threatens to catch up with him as much as with her. On one level this is just the story of a young woman trying to survive, on the other it’s about power, greed and selfish agendas, even when life or death is at stake. Can Arpan really heal her? Can she trust him with her life? And will they both achieve what they set out to do before running out of time?

In “The Gamblers” Ben, an insecure accountant obsessed with statistics, gambling and beating the odds, wins sixty-four million in the lottery and finds himself challenged by the possibilities that his new wealth brings.

He soon falls under the influence of charismatic Russian gambler Mirco, whom he meets on a holiday in New York. He also falls in love with a stewardess, Wendy, but now that Ben’s rich he finds it hard to trust anyone. As both relationships become more dubious, Ben needs to make some difficult decisions and figure out who’s really his friend and who’s just in it for the money.

In “The Sanctuary on Cayman Brac” the loose ends from both novels come to a head in a sizzling finale on the Carribbean Island when the truths about all frauds and/or miracles will be released.

Praise for “The Healer”:

Lots of twists and a brilliant ending

I like a book that has me second guessing all the way through. It grabs hold and takes you on a wonderful journey. This book is exactly like that. I changed my mind as to who is wrong and who is right, who could be trusted and who couldn’t, from the start through to the finish.

Praise for “The Gamblers”

This story is thrilling, fascinating, fast-paced, and it presents interesting physiological questions on human natural in general and Ben Andrews in particular. A wonderful story I highly recommend!

26 thoughts on “Mystery Monday: “The Fraud or Miracle? Trilogy” by Christoph Fischer”