This is the second “three things” serial, in novel form — Murder at the Bijou — Three Ingredients I. by the fabulous Teagan Ríordáin Geneviene. 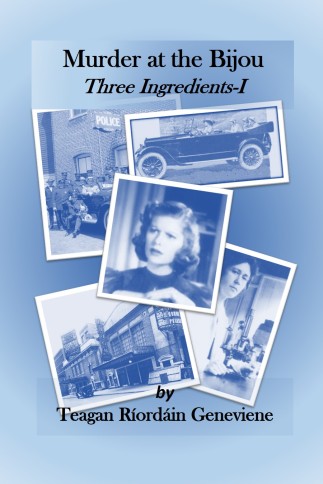 Yes, that’s the cover. (She loves making covers!) Teagan kept it similar to the one for the first serial, The Three Things Serial Story, but with different 1920s photos.

For those of you who are not familiar with her blog serials, here is Teagan introducing it:

Ages ago I developed a writing exercise. I asked friends to give me three completely random things. Then I would write until I had mentioned all the things. I brought that exercise to my blog (Teagan’s Books), but I had the readers send me their things. I let the random things drive every detail of a serial story, setting, plot, and characters. That resulted in The Three Things Serial Story, which gave birth to this culinary mystery. However, this time the “things” are food related — or ingredients.

As with the first serial, Murder at the Bijou — Three Ingredients I is a spontaneously written, pantser story. I wrote by the seat of my pants and let the “ingredients” readers sent each week drive a new serial story. This is the “bookized” version of that serial.

This time the Jazz Age setting is Savannah, Georgia where our flapper, Pip, is “sentenced” to live with her grandmother and learn to cook. Pip gets caught up in a layered mystery that includes bootleggers, G-men, and the varied challenges of being a young woman in changing times. She meets new friends, including some animal characters.

If you have not read The Three Things Serial Story, be warned. This adventure contains a bit of a spoiler, but does not go into detail about it.

Murder at the Bijou — Three Ingredients I is available through and Amazon and Create Space. If you don’t have a Kindle, Amazon also offers a free app that will let you read Kindle books on your computer or other device. The purchase links are below. But first, here’s a snippet.

In my imagination, a young Lucille Ball would play Pip.

Either I woke up feeling horribly nauseated, or the queasiness woke me. I’m not sure which. I opened my eyes to complete darkness. There was no light, no sound. The way my stomach tossed reminded me of a small boat on the ocean. It was as if I sailed in a lightless limbo.

Oh… that was a bad train of thought to have with an unsettled belly.

Think of something else! Anything else, I told myself.

I stood unsteadily. The sound of a cricket came to me. Good. The utter silence had been very disturbing. I became aware of the cool moist earth beneath my palms.

Where the Sam Hill was I?

I sat back on my heels, focusing all my senses. My eyes might as well have been closed — it was that dark. Bare ground was beneath me. The air had a musty odor. A sickly sweet scent clung to my bobbed hair.

The cricket’s chirping was the only sound. Still sitting, I turned. My eyes widened and strained, trying to see in that heavy darkness. When I looked up I was rewarded with the sight of a thin line of pink light.

The faint glow allowed me to see vague outlines a few feet away. I stumbled over something and stooped down to let my hands figure out what it was. I felt a burlap bag and round lumps. Rutabagas? I felt around and found another bag. That one felt like potatoes. I moved closer to the wall and a tall shape. Yes, a ladder, my questing hands confirmed for my still foggy brain.

Gazing up at the line of pinkish light I realized I was in a root cellar.

But how did I get there?

Teagan Ríordáin Geneviene, a southerner by birth, was “enchanted” by the desert southwest of the USA when she moved there. Now a resident of a major east coast city, she longs to return to those enchanting lands.

Teagan had always devoured fantasy novels of every type. Then one day there was no new book readily at hand for reading — so she decided to write one. And she hasn’t stopped writing since.

Her work is colored by her experiences in both the southern states and the southwest. Teagan most often writes in the fantasy genre, but she also writes 1920s stories and Steampunk. Her blog “Teagan’s Books” contains serial stories written according to “things” from viewers.

You can also visit me at:

18 thoughts on “Mystery Monday: “Murder at the Bijou — Three Ingredients I” by Teagan Ríordáin Geneviene”