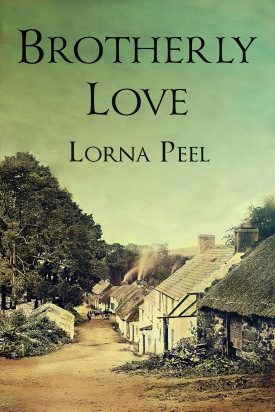 I’ve recently reviewed Lora Peel’s “Into the Unknown” and had to read more of her.
“Brotherly Love” picks a very interesting subject of 19th century Irish culture: What is a widow to do when people hail her late husband as champion. Rivalries, family animosities, secrets and lies all interfer wth the life of our heroine, who first and foremost, feels happy to be free of an opressing mother-in-law.
The answer to her romantic life could be Michael, a newcomer to town, but one that is not looked upon with approval by everyone involved.
I enjoyed the complex situation and how the author portrayed and handled it. The characters are well drawn and the dialogue and the descriptions are apt.
Given that I don’t often like historical romance as opposed to historical fiction, I am especially impressed with this.

Lorna Peel is an author of contemporary and historical romantic fiction. Her debut novel, ONLY YOU, a contemporary romance set in London, England, was published in 2014. INTO THE UNKNOWN, a World War Two romance also set in London, was published in 2015 and reached Amazon’s top 20 best sellers in 20th Century Historical Romance. THE IMAGE OF HER, a romantic suspense set in rural England about a woman’s search for her birth mother, was published in May 2016. NEW BLOOD, a romantic suspense set in a stately home in Yorkshire, England, will be published on 3rd November 2016.
Sign up to her newsletter at: http://eepurl.com/ciL8ab
Website http://lornapeel.com