Roy Huff is a Hawaii-based scientist, science fiction and fantasy author, and teacher who overcame the hardship of a family plagued by severe poverty and mental illness. He remains committed to pro…

Roy Huff is a Hawaii-based scientist, science fiction and fantasy author, and teacher who overcame the hardship of a family plagued by severe poverty and mental illness. He remains committed to productivity without misery and happiness without guilt. Read more on Amazon or his blog.

What’s your favourite part of the lifestyle of an Author?

I like creating ideas that touch other people and having those ideas live forever.

What made you start writing?

I was writing a paper for an English class late in life while working on my fourth and fifth concurrent degrees. We had to share the paper around, and one person said they’d like to read an entire book about Everville. I thought to myself that it was something I could do, and then I made the decision to turn into a book, and eventually a series.

Is there an Author that you consider your inspiration?

That’s like asking if you can just eat one potato chip. I love so many: C.S. Lewis, Tolkien, Jules Verne, J.K. Rowling, George Orwell, Orson Scott Card, and the list goes on.

What’s your number one tip for an aspiring Author?

Write every day, even if it’s just a sentence.

What type of book do you like to read and does this differ from the genre that you prefer to write?

I actually try to read in my genre mostly. My series is fantasy, but I’ve been reading science fiction, because I’m currently working on a time travel book, which I hope to have completed in the coming weeks. 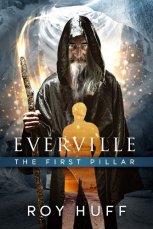 Which one of your characters would you most like to spend time with?

Definitely, The Keeper, from the Everville series. I’d like to see into his eyes of wisdom.

Which book do you consider a must-read?

If you’re referring to someone else’s book, again, it’s hard to say just one. If you like fantasy, pick up the Prydain Chronicles. I’m also a big lover of A Christmas Carol by Dickens. Dune is also a great series.

Roy has a great web presence, you can find more information about him at some of the the below links.