Book Review: The Luck of the Weissensteiners by Christoph Fischer Posted on April 15, 2016 by grandmapeachy

Source: Book Review: The Luck of the Weissensteiners by Christoph Fischer

Such a fantastic review – I had to re-blog this on my “Historical Saturdays”.

Book Review: The Luck of the Weissensteiners by Christoph Fischer

Posted on April 15, 2016by grandmapeachy

After reading a blurb and some reviews of The Luck of the Weissensteiners by Christoph Fischer I decided to select it for the April book of the month for the Goodreads Trail Mix Readers group. 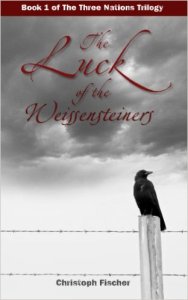 The story begins in the early 1930’s when people still remember WWI and referred to it as “the Great War.” The setting is in Bratislava Slovakia.  The story follows two families, one Jewish the other German Catholic through the rise of anti-semitism leading into WWII and the aftermath. There is a lot of political background in the book used to not only further the plot but to help the reader understand the mindset of the characters. The historical accuracy was enlightening and made for an enjoyable read.

The author used third person narrative which allowed the narrator to explain historical and current events taking place while advancing the plot and character development. I found the perspective of the ordinary man refreshing. The feelings and thoughts of the common people during the expansion of Hitler’s Reich helped me to understand the beliefs and fears of the people. Decisions made by the characters were based on what they believed would happen and often those beliefs were unfounded. It was unbelievable to them that Hitler would be allowed to continue unstopped; surely the rest of Europe would stop his advances. When he successfully invaded these countries they were shocked and began to fear for their own future. The suspicions people held of their neighbors and friends, the loss of personal freedoms and control over ones own life created characters with whom I could easily empathize. I could see in my mind’s eye the horrors that the characters saw, I could feel the sadness, fear, humiliation, suspicion, disappointment, anger and myriad other emotions of the people in the story. The characters were real people with real lives that were interrupted and irreversibly changed.

Over all this book has an excellent plot and I did not feel that it was just another WWII story. The characters came to life as I lived with them through the history of what happened in Europe at the time. An excellent read for any history buff especially those who have a keen interest in WWII.  The subject matter was handled expertly and is appropriate for teens as well as adults. I look forward to reading more in this series.

22 thoughts on “Book Review: The Luck of the Weissensteiners by Christoph Fischer”