I’m finishing my “award season 2015” with the Thriller and Mystery Category, especially since one of the winners, Hannah Howe,  was featured earlier today.

This is another difficult area. I have read so many good thrillers and mystery novels that it was too hard to make a decision. To truly honour the most deserving I had to break it down into a few sub-categories.

So here we go with the Excellence Awards: 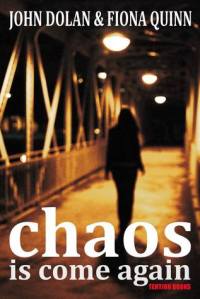 “Chaos is Come Again” by John Dolan and Fiona Quinn was one of the most enjoyable reading experiences for me last year. Full of great humour it throws us readers into the world of publishing where Avery gets landed with the ‘client from hell’ , Travis, a difficult and also blasphemous author whom she is supposed to woo.
Her home life is nothing short of chaotic, too, with an increasingly demented mother to look after and other family commitments that take their toll.

On twitter she connects with Sean, unhappy with his kinky and fame hungry girlfriend. And the Angel serial murderer is on the loose.
Written with a great blend of understated humour and great storylines the book was impossible to put down for me. I loved the way each character was portrayed with empathy and depth while providing light-hearted and un-pc jokes. I enjoyed the twitter conversations between Avery and Sean in particular, but the interactions and dialogues between all the ‘players’ in this book were incredibly well done.
The writing was at times off the wall like a Tom Sharpe novel, at others more thoughtful and primarily character driven. The murder plot seemed almost secondary, even though the suspense provided yet another excellent interest and source of power to push the events along.
I already was a fan of John Dolan for his amazing “Time, Blood and Karma Series” and he has proven with this masterpiece that he is not a one-trick-pony, but has a lot more up his sleeve.
An enthusiastic 5 stars.

I’ve become a fan of this series rather quickly. Unlike formulaic and repetitive mystery series, this one changes tone and location as Sam Smith and her psychologist partner are going to a conference in Bulgaria. I’ve recently read a few books set in Bulgaria and enjoyed the extensively researched background information and descriptions. Sam, being an investigator, off course soon finds something to occupy her mind with and stumbles upon something from the past and some sinister doing in the present.

The novel builds up slowly, giving much time for the well chosen characters to be fully presented. Howe writes them with dept and makes them very engaging. I take an interest in psychology and so I found the setting at said conference particularly rewarding.
One discussion between psychologists at the conference about Freud reverberated one I had only last week with my partner. This is an easy read yet with dept and substance. 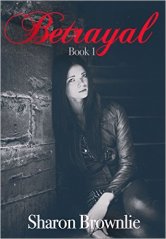 “Betrayal” by Sharon Brownlie  was a tough read. It starts with a brutal scene between a heroine-addicted prostitute, Helen, and her pimp. As we follow Helen we learn more about her life and her past and watch her taking revenge.

What strikes me most about this book is the great characterisation. The investigating police officer and Helen are multi-dimensional characters, they aren’t just good and bad and simplifying stereotypes. This book really makes you think deeply. At times I found the book uncomfortable but always interesting and hard to put down.
I would definitely recommend this one.

“The Lei Crime Series: A Snake in Paradise (Kindle Worlds Novella)” by Eden Baylee is a very impressive crime novella set in Hawaii. It starts with a powerful prologue which features a woman waking up tied up. It leaves the reader with a lot of questions and curiosity for the chapters to come.
Then the actual story begins. Recently divorced Lainey Lee arrives in Hawaii, with a pinch of bitterness and reflection and an appetite to enjoy herself.

She has a snake tattoo that was given to her by her best friend in a symbolic gesture of redefining herself and finding herself.I’ve read about the book on the author’s blog before its released and have speculated about the title of a ‘snake in paradise’ for some time. There were also music lyrics mentioned in her blog post that befit the theme of dealing with a snake. And a snake will be found indeed.
As single woman Lainey soon gets attention from men on the island, some unwanted and some wanted, which kicks of the mystery and suspense part of the story.
Written with great sensitivity the characters are excellently drawn, the dialogues are sharp and poignant and the plot is well thought out.
An engaging, entertaining and stimulating read. Very enjoyable.

Now we’re coming to the Awards. First up: Best Noir Novel:
“Cold Remains” by Sally Spedding is a gripping and at times frightening read. Very dark and bleak in places it tells a complex tale, blending a narrative from 1946 with one in 2009, both taking place at the same property. In the present storyline a man joins a writer’s retreat in Wales and gets on the trail of an old mystery.
Very gradually the tension and suspense creep into your veins. Spedding understands how to work her way into your mind.

I picked up this book at a book fair in Wales, eager to read literature set in my new home, and I certainly was not disappointed. The novel portrays language and people in realistic ways, I could empathise with the ‘outsider’ character many times.
The actual story is really twisted and has plenty of surprises for you in store. If you like noir then this should not disappoint you. An excellent read.

“The Damascus Cover (The Jerusalem Spy Series Book 1)” by Howard Kaplan is a gripping and intelligent spy thriller. It contains excellent depictions of the 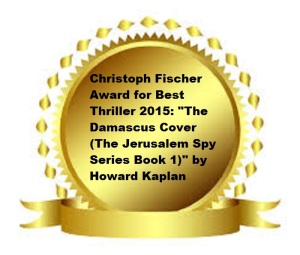 locations, great insights into the politics and times portrayed and a wide range of interesting and complex characters.
Complexity is woven throughout this novel, which slows the pace but adds to the deeper enjoyment for this very satisfied reader.
A solid plot with plenty of twists and surprises, engaging and hugely rewarding.

“Touching the Wire” by Rebecca Bryn is a heavy and at times difficult read. The location is a death camp in Poland 1940 and 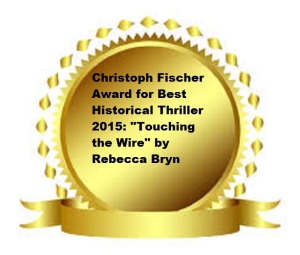 the author spares us little to show the gruesomeness that is camp life. This is the strength of the first part. Much of the literature about the time glosses over and makes us shed a tear. Bryn is more truthful, yet then manages to weave in a love story between an inmate and a young doctor. Very powerful and impressive with lots to think about and reflect upon.
Then forward to present day England where the granddaughter of the doctor delves into the past. When I saw the second part I thought I knew where this would be going but Bryn does an excellent job at bringing the halves together.
A great read I would definitely recommend.

“Bells On Her Toes” by Diana J. Febry is an excellent murder mystery set in the British country side. It starts with a scene in the police station that establishes the complex background between the investigating team. Only then do we learn about the fire and a dead body at a country Estate.
The focus then sw

itches on the Earl and his wife, who are both fantastic characters. We get to see into her mind with some internal dialogue, but hands down, Gladys, so her name, is my favourite character in a book for a long time. An odd, excentric with a mixture of anger and bitterness, direct honesty and occasional warmth, she is absolutely fascinating and show stealing.
The plot involves village politics, secrets from the past, twists and unexpected turns. The cast and their backgrounds are rich and because of it the book never gets boring. This is Febry’s most entertaining and compelling book in my opinion. Her writing is sharp and the story is very well plotted.
Highly recommended.