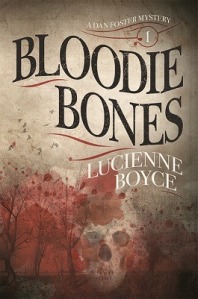 “Bloodie Bones: A Dan Foster Mystery)” by Lucienne Boyce is a rather charming mystery set in England in the 1790s. The murder of a gamekeeper is setting in motion an investigation by Dan Foster, not a full detective, which adds to the unique character of the story.
Bloodie Bones of the title is a local myth, “You’ll hear him of a night, his bones rattling behind you”. Was Bloodie Bones the murderer, or was it a poacher? Many suspicions point in different directions as the investigation unfolds.
The scenes are set nicely with enough detail to make the reader at home in the era and get an authentic feel, yet there is no overload of researched material to get in the way of the well constructed plot.
Customs, language and thought patterns of the times are well portrayed and together with the excellent mystery make for a solid and compelling historical mystery read.

website
http://www.lucienneboyce.com/
Find the book on Amazon US and Amazon UK

Lucienne was born in Wolverhampton and now lives in Bristol, England, which is the inspiration and setting for much of her work. She completed an MA in English Literature (with Distinction) with the Open University in autumn 2006, specialising in eighteenth-century fiction. She is a member of the Historical Novel Society, having joined shortly after the HNS was founded. She has written numerous articles, reviews and interviews for the HNS and was formerly editor of the Society’s fortnightly e-Newsletter. She is on the committee of the South West and Wales Women’s History Network, and is a member of the the Regional History Network and the Friends of the Women’s Library.