“Ludwika: A Polish Woman’s Struggle To Survive In Nazi Germany”  will be released Tomorrow, on Dec 14th
Here is another exceprt to whet your appetite!

The paperback version is available already.
at the CreateSpace eStore: https://www.createspace.com/5897536
The cover was once again designed by the talented Daz Smith.

Blurb: It’s World War II and Ludwika Gierz, a young Polish woman, is forced to leave her family and go to Nazi Germany to work for an SS officer. There, she must walk a tightrope, learning to live as a second-class citizen in a world where one wrong word could spell disaster and every day could be her last. Based on real events, this is a story of hope amid despair, of love amid loss . . . ultimately, it’s one woman’s story of survival.

Here is another excerpt from the novel:
(Follow this link to a previous excerpt) 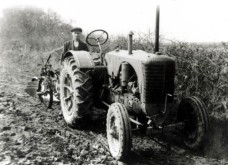 Ludwika and her sister began harvesting the wheat. It was exhausting having to do such a big field only with scythes but it was the best that they could do. They had seen Karol Wojick, one of the neighbouring farmers hide parts of his machinery in a shed in the woods before he had joined the defence. Many of those who had decided to flee the invasion had taken as much of their valuables with them as possible and hidden the rest in the hope of retrieving it later. This had created a shortage of materiel and, coupled with the manpower shortage, made the farming work so much harder.
“We’ll never get it all to safety like this,” Stasia said, looking with frustration at her scythe and throwing it on the ground. “If the rain comes it will all go to waste.”
Ludwika understood.
“Keep your heart up,” she said. “Look what we’ve managed already. We can be proud.” 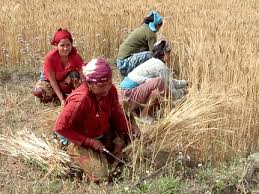 She pointed at the wheat they had cut.
“We need to get it off the field, too,” Stasia added, close to tears.
“Don’t worry,” Ludwika said, trying to stay optimistic. Her sister was right, though. Something needed to be done soon. AS much as she tried, though, she couldn’t come up with any good solution. Then it hit her – the farm equipment Karol Wojick had hidden in the woods.
“I’ve got an idea,” she said and told Stasia what it was.
“You’re crossing a line,” Stasia warned her when she heard the plan. Her voice, however, carried more admiration for Ludwika’s bravery than gloom or worry.
“Sooner or later the szkopy will find the shed and take away what’s in it,” Ludwika replied defiant.
Stasia giggled at her sister using such a bad word for the Germans. Even though they were alone, she looked carefully around to see if any of the ‘castrated rams’ could hear them.
“Better it got to some use before then,” Ludwika said, serious despite the joke.
“We promised mother not to take any risks,” Stasia said, although her warning sounded half-hearted.
“You know I have to do it,” Ludwika said and Stasia nodded. “There is so much wheat,” Ludwika pointed out. “We can’t let it go to waste. We’ve got no alternative. Collecting it by hand would take too long; and you said yourself that the next rain will ruin it all. We have no choice and the Wojicks aren’t using it, are they?”
Stasia grabbed the scythe and bent down to cut more wheat.
“I’ll be waiting for you with the bushels,” she said.
Stasia was always so full of energy and optimism and Ludwika was grateful that the brief moment of weakness had been overcome.
“Be careful,” her sister added without turning around. “We all need you.”
“I will,” Ludwika replied.
It hadn’t been difficult to break the lock of Wojick’s shed and even less difficult to get an old tractor going that she found there. Her brother Franz had borrowed it often in the past. He had drowned in the river two years ago. The memory of his passing still stung Ludwicka; she missed him more than ever. But thanks to watching him closely when he used the tractor, she would be able to bring the bushels off the field and into the safety of their family farm.
Ludwika’s dark curly hair kept falling into her face as she steered the out of the woods and onto the open road. She had lost her hairband somewhere on the way and was struggling to keep a clear vision. For her this was a welcome distraction from the dangers that were looming and were foremost in her mind. That engine made a terrible noise; she worried over the attention it could bring. Would the ‘szkopy’ allow her drive on the road, she wondered? Would they confiscate the tractor if they saw her? Would they beat her as they had done with so many others for no good reason? Anything a Pole could do was automatically ‘verboten’, it seemed. If she was found, the Germans would understand, surely – the crop had to come in. It was already late in the season, since the war had delayed the harvest. What did the invaders intend to do about the harvest? They could not let the good food go to waste; didn’t they need provisions, too?
She kept her eyes steadily on the road and tried not to think about the dangers.
The Germans had not been seen around their tiny village for a few days, which had encouraged Ludwika to go ahead with this risky enterprise on her own.

At a height of 4 foot 10, with piercing blue eyes, an attractive bone structure and a curvy figure, Ludwika turned many a head. Her beauty, once an asset, had attracted the wrong kind of attention from the brutish soldiers. She wished for her hair band now that would help distract from her features.
The roads into the village were deserted, only some women were digging for potatoes in the neighbouring field. Przedborów had no defined village centre or a market square, most houses being small farm buildings, made of stone with simple tiled roofs or just wood, surrounded by sheds, stalls, orchards and small woods. It was difficult to know what was going on behind the next farm. What was a quiet and peaceful atmosphere in the days before the invasion, now felt eerie. The women in the field were visibly relieved when they saw that the engine noise they heard was coming from Ludwika’s tractor and not a German tank. Soon she would join Stasia on the wheat field. Ludwika hadn’t felt comfortable leaving her sister alone but today it was unavoidable. For a 17 year old, Stasia was mature in looks, and very pretty. Ludwika feared this would make her a target for passing soldiers. Stasia was also overconfident and loud and likely to do something hasty. It was a constant worry for her family.
Still, Ludwika wouldn’t know what she would do without her little sister. They supported each other in this frightening time and kept each other’s spirit up. They refused to believe the rumours that all Polish people would be deported from their properties and that their land and livestock be given to German settlers. With so many empty houses and farms around, the Germans couldn’t possibly have enough workers to take them all over? Surely the Poles who had stayed behind and hadn’t been deported would be left their possessions. Ludwika couldn’t imagine this ‘cleansing’ to happen as many feared. Regardless of how shockingly violent the force used by the occupiers had been so far, things had to calm down and sense had to prevail. All bad things would come to pass and might even return near to normal. Whenever their mother believed those rumours and got herself worked up, the sisters had each other to put things into perspective and keep calm.
Today’s desertion of the village was due to another one of those rumours. Further in the north, Germans were allegedly clearing entire villages and forcing the inhabitants to march east. The more hysterical reports even claimed that people were being led into the woods and killed by machine-gun fire. Others told stories of children being taken from their parents, allegedly to be given to childless couples in Germany. Who had heard of such cruelty?
Seeing other Polish farmers showed Ludwika that she was not the only one who believed the stories to be exaggerations and scare mongering. 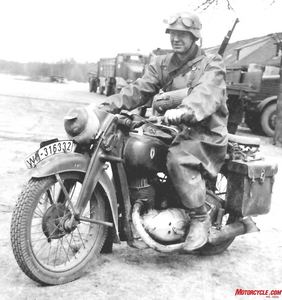 She was almost at her field and could see Stasia waving at her when she heard the sound of a motorbike behind her. On it sat a German soldier who waved at her to get to the side of the road. She pulled over, expecting him to step down and talk but he gestured her to get off the road altogether. She only had a few yards to the next crossing, behind which lay the exit to her field. When she tried driving on the man blocked her way and pulled out a gun. She ducked and lost control of the vehicle, which now swerved into the ditch by the road. The man put the gun away and mounted the tractor, pulling her roughly off it. She pointed at her field repeatedly, hoping he would understand. She didn’t speak any German. She pointed at herself and said “Ludwika” and then pointed at the field and said “Ludwika.” He finally got it and drove the tractor out of the ditch for her and onto the field as she had intended to do herself. She ran after him and managed to catch up with the tractor as he stepped down. He pointed at himself and said “Manfred”, he bowed, then did the Hitler salute and went quickly back to his motorbike. Not a minute too soon as it turned out. He only had got back on the bike and started driving when a convoy of army vehicles came up behind him and rolled past the field into the village.
Their sudden appearance was a worry. 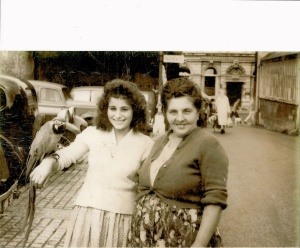 Blurb: It’s World War II and Ludwika Gierz, a young Polish woman, is forced to leave her family and go to Nazi Germany to work for an SS officer. There, she must walk a tightrope, learning to live as a second-class citizen in a world where one wrong word could spell disaster and every day could be her last. Based on real events, this is a story of hope amid despair, of love amid loss . . . ultimately, it’s one woman’s story of survival.

Review (from an Advance Review Copy) by Lorna Lee, author of “Never Turn Back” and “How Was I Supposed To Know”:

“This is the best kind of fiction—it’s based on the real life. Ludwika’s story highlights the magnitude of human suffering caused by WWII, transcending multiple generations and many nations.

WWII left no one unscarred, and Ludwika’s life illustrates this tragic fact. But she also reminds us how bright the human spirit can shine when darkness falls in that unrelenting way it does during wartime.

This book was a rollercoaster ride of action and emotion, skilfully told by Mr. Fischer, who brought something fresh and new to a topic about which thousands of stories have already been told.”

Get the book at your Amazon

9 thoughts on “Excerpt #3 from “LUDWIKA: A Polish Woman’s Struggle To Survive In Nazi Germany””