Today I have the pleasure of introducing another ther excellent historical novelist:  Steven A. McKay, the bestselling author of the Forest Lord historical fiction series. Welcome Steven, please tell us a little about yourself as writer and as person.

I’m a 38 year-old Scotsman who writes about England’s greatest mythological hero: Robin Hood. When I’m not writing I love to spend time with my family – I have a wife and two small children – and I also play guitar, being a big fan of heavy metal like Iron Maiden, Slayer and Behemoth.

I originally wanted to write something set in Britain and, when I settled on Robin Hood as my main character I knew I’d have to make my version different to all the others. Let’s face it, the legend has been done to death over the years BUT pretty much all of the different films and books and TV shows have been set in the same time period and the same place. When I looked at the very first stories ever written about Robin Hood I realised they were set in the forests of Yorkshire, in the time of King Edward II. So that gave me a new angle to explore. I’d say my take on the legend is quite different to anything that’s gone before…

How did you come up with your stories?

I look at the history and try to come up with interesting plots that will fit in with the times. Generally, when I’m at work and on a long drive I turn off the music and use the silence to think of ideas. It works every time!

Which character is your favourite? 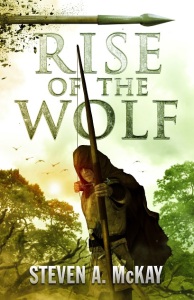 Little John, by far. I love the idea of a huge man who isn’t overly aggressive or arrogant unless it’s called for and also has a great sense of humour. But, if you get him angry… My narrator, Nick, reads him perfectly.

I honestly can’t say for most of them. I was contacted by the producers of Goodfellas last year – they were interested in my second novel although they never followed it up, unfortunately. My favourite actor right now is Jason Statham but he’s way too old to play my Robin and I’m not a big film buff so I couldn’t name any of the hot new actors that are working nowadays.  I’d love my narrator, Nick Ellsworth, to get a part though, along with Statham who is a hero to all of us bald men!

My editor has previously worked with Bernard Cornwell, Jilly Cooper and Ben Kane amongst others. She really knows her stuff, obviously. The way I work is, I write the book, then I send it to my beta-readers who pick up any obvious holes in the plot. Then I rework it and send to my editor. She then suggests ways to make things better and she is ALWAYS on the ball. Honestly, I’ve written things and not expected her to find fault, only for her to tear me to shreds, basically! It can be harsh, but I end up with a much better book at the end of it all.

What song would you pick to go with your book?

Despite my love for metal of the heaviest kind, Jethro Tull are my favourite band. “Minstrel In The Gallery” by Tull would be the perfect song to accompany any of my books. It tells a story itself, from the soft, acoustic intro, to the blazing electric guitar solo before the main song kicks in and Ian Anderson’s brilliant vocal carries us back to a time long in the past…

I have, literally, just before I started this Q&A, finished editing my forthcoming novella, Friar Tuck and the Christmas Devil. I love the festive period and thought it would be fun to write a story about it, set in medieval England. Thinking about it from a commercial standpoint, maybe it was a bad idea, since people will only buy it during November or December but…look at Noddy Holder and Slade! People love listening to the same old Christmas songs year after year – I’m hoping they’ll read my novella every winter too…

What book are you currently reading and in what format (e-book/paperback/hardcover)?

I’ve got the new Douglas Jackson book in my hand, hardback, ready to take on our autumn family holiday. Scourge of Rome should be a cracker, I love Doug’s novels and really recommend them highly.

I also read ebooks as well, though. You can read a book on the tablet or Kindle at night, in the dark, so your partner isn’t moaning about the light still being on and keeping them awake. You can also find some great bargains in the ebook format.

Well, that’s an ever-evolving answer. When my debut novel came out and someone posted the first ever 1 star review of it I wanted to punch them. Then someone else posted a crap review and it was a kick in the guts but…not quite so hard to take…By the time someone posted the tenth one-star review it was meaningless. I had a couple of hundred four or five-star reviews to offset the bad ones.

But, that said, I still read every review and sometimes the critical ones make very valid points which I take on board and think about when writing the next book.

I still work a full-time job and, as I say I have two kids so my life is probably not that different to anyone else’s. I go to work in the morning, come home and play with the kids until it’s time for them to go to bed, then I sit down and write. Or play guitar, depending on my mood! I won’t tell you how many Jackson guitars I have, but my wife thinks it’s about six too many…

We tend to go on short holidays two or three times a year, just to log-cabins dotted around Scotland or England, and I really look forward to those times. The thought of those breaks away is what keeps me going when I feel down. Being a dad is the best thing ever!

Thank you, Christoph, for your questions! They were a little more challenging than the usual ones…

5 thoughts on “Saturday Historical Novelist Interview with Steven A. McKay”