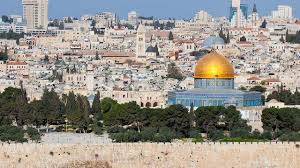 Twenty years ago I rented a room off an art student in London. He was enrolled in a film course at St Martin’s College, I had my first job at the British Film Institute – we had a lot in common and a great time together. Sadly we lost contact when he moved back to Israel.

By chance we re-connected over the internet a few years ago and finally I got to meet my friend Ofer again this month in Jerusalem, where he works in a beautiful hotel in the German Colony. I had a fantastic time  -Ofer is the best tour guide ever.
I also have come a step closer to getting THE LUCK OF THE WEISSENSTEINERS translated into Hebrew.

But back to my holiday. I was asked to write about my experience, so here goes:

Not only is Jerusalem a wonderful
city with a lot of historical sights, it has, as we all know, a long history of conflicting interests. While out sight seeing, watching TV and mingling with the locals I learned a lot about the issues and was reminded of some truths and also about some wrong assumptions I have made. Without becoming political, here are some observations and thoughts which I hope won’t offend anyone.

First and foremost I got to understand just how fractured the many religious, political and population groups of the city are within themselves.

For example, while out in an orthodox neighbourhood I was told that some people didn’t want to speak Hebrew because for them it was the language of the socialist and Kibbutz culture and that they spoke Yiddish as a political statement. Since publishing this article I’ve been told that this assumption is wrong and that the group doesn’t speak Hebrew because it is the language of the bible.

This just as a small example to show how divided and sub-divided the groups can be. That shouldn’t come as a surprise.

But it is easy to forget when you see headlines and politicians state the case for their people or their nations. That is the joy of Democracy and its processes that an elected leader is lucky if he can speak for 50% of his people (or 50% of those who elected him). When politics and religion overlap it’s even more complicated.

Throughout my stay I was surprised at every corner at the multitude of attitudes towards the conflicts and more so at the great humanity within the population.

According to ‘various gospels’, humans have shown their best and worst sides in this city. This tradition continues.

During my stay a saw a TV programme about a group of Orthodox Jews who came under attack in a hostile territory but then they were saved by a Palestinian family and given shelter in their home until they could be brought to safety.

The following day I got caught by group of Arab woman who demonstrated outside the Wailing Wall and frightened visitors by shouting at them. 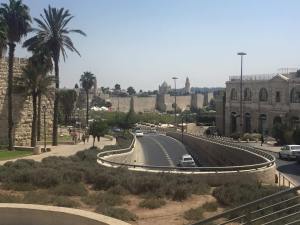 An eight year old boy was arrested by the authorities for throwing a stone.

The best hummus place in town, a small shop with just a few seats was amongst the most welcoming places. Ofer and I were the only non Arabs in the establishment and we couldn’t have felt more welcome. During a street party in the German colony Arabs, Christians and Jews were mingling.

There is still a lot of political work that needs to be done but there were great moments of hope.

26 thoughts on “My journey to Jerusalem”