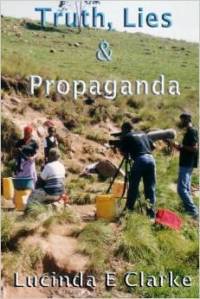 “Truth, Lies & Propaganda: in Africa (Truth, Lies and Propaganda Book 1)” by Lucinda E Clarke is a very entertaining and insightful story about a journalist working in various countries in Africa. The book works on many levels as it reads like an autobiography as well as a fictional story. The writing style is upbeat and often understated, then comes forth with journalistic sharpness and precision. You get to learn a lot of details, minor and major, about the countries and broadcasting stations involved while caring for the ‘protagonist’ and her personal life and career.
Libya, BOtswana and South Africa are amongst the locations. As writer I could relate to the theme of self doubt and ‘making it as professional’ that runs from the foreword to the end of this part in the series.
A very smooth and enjoyable read with great substance. Excellent.

The Book an Amazon UK and Amazon US

Born in Dublin, matured in England, wanted to follow grandfather into Fleet Street, family not wildly enthusiastic – unfeminine, unreliable and dangerous. Went to dockland Liverpool – safe, respectable and pensionable. Returned south with teaching qualifications, extremely good at self defence. Went crofting in Scotland, bred Cairn Terriers among other things. Moved to Kenya with 7 week old daughter, abandoned in the bush. On to Libya, surviving riots, public hangings, imprisoned husband and eventual deportation. Queued with the unemployed millions in UK. Moved to Botswana – still teaching – opened and ran the worst riding school in the world,- with ‘How to…’ book in hand.
Moved south to South Africa taught for four years, then in 1986 became a full time freelance writer, for major corporations, UNESCO, UNICEF and the South African Broadcasting Corporation for both radio and television. Moving into video production in 1986, received over 20 awards, specializing in education, documentaries, municipal and government, one script for National Geographic.
Returned UK Jan 1994, back to SA before April elections.
Taught in 7 countries, including Britain, Kenya, France, Libya, Botswana, Swaziland and South Africa. Also found time to breed animals for pet shops, write a newspaper column, publish two books, Heinneman & Macmillan, and work for several years as a radio announcer. Married with two daughters, a stepson and stepdaughter, moved to Spain in 2008. I now write a monthly column and have published two more books, a memoir and an adventure story set in Africa.