Sleepless nights, day and night shifts in a battle against time but we made it. Proof reading for THE HEALER is over before the family takes X-mas residence in our house. PHEW.
Interested parties for a pdf or mobi advance review copy please get in touch. 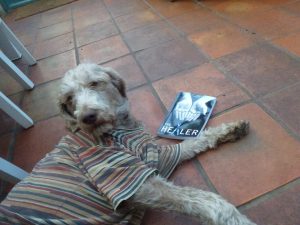 “The Healer” is also available for pre-order on Amazon

and you can find The book on Goodreads

I’ll try to be quiet for a few days now, so MERRY X-mas to you all – or: Nadolig Llawen a Blwyddyn Newydd Dda and Frohe Weihnachten!

The first review for THE HEALER  is out, too- from an early Advance Review Copy.

“The story opens with Erica, a pancreatic cancer patient, having just finished a bout of radiation. She is out in the Wales’ countryside in search of a Guru healer, Arpan. The lush countryside descriptions and crisp dialogue instantly drew me into the story, as well as my instant liking and empathy for the protagonist Erica, who’s desperate to find a cure to her illness. Arpan is her answer and when she is immediately rejected by him, his icy voice (coming from inside his humble dwelling) jumps off the page as she begs, “I’m very ill. You are my only hope,” he responds, “You’ve come to the wrong place.” She continues to beg him to share his gift, to save her life, even with this, he asks her to leave. How can one not want to continue reading this story to find out what happens, so thick is the initial tension and conflict that drives the story. When she falls to her knees and he softens a little she says his name and he again rejects her stating that his name is Amesh, one that suits him better. He explains that the man who could help her disappeared with the name, garnering some sympathy for this character, leaving the reader to wonder what his story is and why he is so resistant to helping this struggling, suffering woman. Finally, he comes out of his home and they meet. He’s not what she expected, a bare shell of the man she’d seen images of, a mere reflection of his earlier self as Arpan. When Amesh’s apprentice, Anuj, leads her off the property there is much rich and wise dialogue, “I’m his apprentice and I, too, can see the disorder in your life that needs to be rectified. You carry hurt and anger with you. Your disease has prompted you to fast track those issues and sort them out. Look into your heart and you will find this to be true.” Her car is broken down and she is told to walk to the nearest place but when she arrives no one is there so she returns to Amesh’s place. Then Amesh, invites her in to rest. When she felt Amesh’s hands on her shoulders, the warmth of his hands radiated powerfully through her body. And thus, the healing begins—for both of them. As the author Christoph Fischer moves the story along, we encounter mysterious events, intrigue, and the power of the mind interspersed into scenes and dialogue. When all is said and done, and Erica returns to have her follow-up scans, an unfriendly doctor challenges her with, “What is it you want from this scan,” Dr Kowalski asked, still in a tone that sounded unfriendly. “The notes from your doctor indicate clearly that the tumor is very advanced, and you know that. So why are we looking at it again? Is it a second opinion you want, or do you want to see how fast it grows?” No spoilers with how this all turns out but one can surmise they will be glued to the page as they navigate through corruption, betrayal, illusions, and one mystery after another, right up to the very last sentence in the epilogue, which I didn’t see coming. This was an interesting read, a very satisfying read, with so much of the human condition playing into the scenes: desperation, fear, hope, joy, conniving, greed, and trust. Another great story by the talented Christoph Fischer.

“The Healer” is available for pre-order on Amazon

You can also find The book on Goodreads

When advertising executive Erica Whittaker is diagnosed with terminal cancer, western medicine fails her. The only hope left for her to survive is controversial healer Arpan. She locates the man whose touch could heal her but finds he has retired from the limelight and refuses to treat her.  Erica, consumed by stage four pancreatic cancer, is desperate and desperate people are no longer logical nor are they willing to take no for an answer. Arpan has retired for good reasons, casting more than the shadow of a doubt over his abilities. So begins a journey that will challenge them both as the past threatens to catch up with him as much as with her.  Can he really heal her? Can she trust him with her life? And will they both achieve what they set out to do before running out of time?

Christoph worked for the British Film Institute, in Libraries, Museums and for an airline. ‘The Luck of The Weissensteiners’ was published in November 2012; ‘Sebastian’ in May 2013 and The Black Eagle Inn in October 2013. “Time To Let Go” , his first contemporary work was published in May 2014, and “Conditions” in October 2014. He has written several other novels which are in the later stages of editing and finalisation.