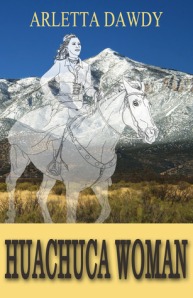 HUACHUCA WOMAN is a work of historical fiction. At 75, Josephine Nichols hasn’t been up to caring for her southeast Arizona ranch. She’s thinking of selling out when spring break 1952 brings the Nichols cousins to the ranch and its matriarch. Recording the teasured stories of borderlife as only Jo can tell them, they get more than they dreamt of, bargained for or knew…stories about Geronimo’s visit to the ranch, of Pancho Villa and the Mexican Revolution, of WWI and of Jo’s struggles with depression and lost loves. Jo’s ties to the land and family mark her storytelling and lead to renewed commitments

“HUACHUCA WOMAN” by Arletta Dawdy is set in Southeast Arizona from 1886 to 1961. In 1952 Josephine Nichols lives on Lazy L Ranch and is thinking of selling out but is challenged in her resolve by the arrival of family visitors of a new generation.
Josephine tells the story of her family from the early beginnings of their settlement, good night tales that – in beautiful little snippets – which portray the times and, more importantly, the conditions of life in those days with a love for detail and amazing warmth. Whether it be the relations between Indians and Whites, the relations between the US and Mexico, American history, Mexican history, market and farm life, technological changes, the Indian Wars, the European wars – all of this is part of the great novel that Arletta Dawdy has created for us.
In the small picture we have Josephine and her family adapting to these outer circumstances. Josephine tells about her complicated love life, the marriages and about her friends, her love for the land and the ranch which survived for such a long time.
Our Heroine Josephine is a truly loveable and amazing character, one that everyone would love as a grandmother, knowledgeable but also inspirational. I was recommended this book by a very reliable source but I did not expect to like it this much. It is a great read that went by too fast and left me wanting for more. It is easy to read and written in simple but beautiful prose. I loved the way the drama is understated as it is told by a mature and calm story teller who has lived through it and made her peace with it.
As European I learnt a lot about American History that I did not know, despite having watched many a film and read the odd book or two about history. This was a real treat and find, just as I had been promised and beyond.

Please tell us a little about yourself and the book.

I’m a retired social worker and have been writing all my life. There’s more about me on my author’s page on Amazon if you want to read more.

How did you come to writing in the first place?

An only child in my formative years, I developed a strong imagination. It took many more years to believe I could write which was something other, talented people did.

What inspired you to write about Huachuca Woman?

I fell in love with Cochise County, Arizona and the Huachuca Mountains on a trip into the Southwest; after hearing my brother-in-law relate one- liners about his grandmother Josephine who lived here, I was hooked.

Why did you choose that particular time and place?

I am fascinated about late 19th and early 20th century history, especially in the Old West

Do you identify with any of the characters?

I have learned to be a relatively strong, independent and somewhat iconoclastic woman as are my protagonists in the series.

When did you first have the idea for this book? Did it come gradually or as a whole?

That evening in 1989, sitting in my in-laws bathroom, wrapped in towels for warmth, with a stub of a pencil and a 2”x3” pad, I wrote the one-liners and was captivated. After that, while working a demanding day job, the research, more travels back to the area and the writing progressed.

How long did it take you to write?

Over ten years with much editing and re-writing after that as I dealt with many rejections.

How did you research?

I combed bookstores, especially in Arizona and New Mexico, visited a multitude of museums, camped in the mountains and on the desert floor to soak up (trite, I know) the atmosphere, ecology and sense of place.

How comfortable do you feel writing about that time?

It enchants me and I can get lost in the stories and research.

Would you say your book has a message and if so how would you describe it?

I hope to encourage others to live courageously in the face of life’s challenges.

How do you write?

I plot in general terms with a timeline worked out to deal with historical events and characters correctly, or as near as I can make them, and coordinate all that with my characters’ experiences. For instance, in HW a number of real characters appear and I tried very hard to make it plausible that they would, could or actually were when and where I place them.

Just now, I am sitting at a small dining table in the heart of the Huachuca Mountains. I have treated myself, with help from others, to a six week writing retreat. There have been deer, wild turkeys and hummingbirds (from Mexico) at my cabin doorsteps. I am nurturing my muse…whoever she is… as I work on ROSE OF SHARON, the third book in the trilogy.

How many rewrites did it take you?

I belong to a wonderful critique group, have asked others to be beta readers and had two professional editors with Marlene Cullen in Petaluma, CA for deep editing. When looking at proofs, I’ve tried the back to front technique and found it hard but helpful. We tend to see what we expect to see, not necessarily what is there; this technique turns it all around. Still, mistakes happen.

Who are your favourite authors / influences?

There are so very many: John Steinbeck, JA Jance and Betty Webb for their attention to social issues; Ann Munro, Eudora Welty who spun magic in their use of language; Women Writing the West members like Velda Brotherton, Susan J. Tweit, Alethea Williams and Andrea Downing who keep the women’s west alive; then, there are the teachers of craft, the biographers who preserve important writers and editors. This list is so incomplete as to be shameful!

Who would play your characters in a movie?

I am very out of touch with contemporary (read: young) actors. I’d love someone of the talent of Meryl Streep for Jo. Even more important is who would write the screenplay which can make or break the movie version and I haven’t the faintest idea.

What is your next project, when can we read it and where can we find out about it?

The second book in the trilogy, BY GRACE, came out in September 2012 and I’m aiming for summer of this year, 2013, for ROSE OF SHARON.

What else would you like us to know about you and the book?

The books are true stand-alone books and can be read in any sequence; what each has in common are the Huachucas and cameo appearances by Jo in the second and third books.

Thank you Christoph Fischer for taking time from your busy writing schedule to do this interview.

Amazon US By Grace 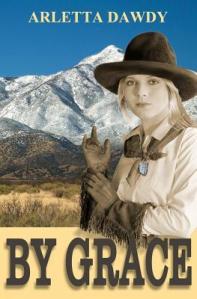 BY GRACE traces the heroic journey of young Grace Pelham as she travels geographically and psychologically into the Far West of the late 1890’s. Following her father’s death, she leaves Albany on a quest to find her vocation and stumbles into unexpected troubles and rewards.

“By Grace” by Arletta Dawdy is a book I have been looking forward to reading ever since her first book “Huachuca Woman”. This book is quite different, as I was told by people in the known, but instead of being a disappointment it showed how talented and versatile Arletta Dawdy is as a writer.
The story is also set in the 19th century but we are now taken to Albany where a young Grace Pelham loses her father and decides to see New York and its museums. On the boat trip she gets acquainted with benevolent members of the high society in town but she becomes an accountant in a lady’s boarding house instead.
In this first part of the book we see the world through the somewhat naive eyes of a young girl, although Grace is already much more evolved than this and does not disappoint us by becoming a silly stereotype. As an artist she sees the landscape of the coastline and of New York with observant and admiring eyes.
Her story moves on as she becomes a jewellery designer but becomes the object of hatred and jealousy. In a series of name changes and moves through the United States the story continues until it comes to a showdown between her and her nemesis.
The background setting of the times is convincing and feels very authentic, Dawdy’s knowledge of art, design and minerals made me imagine her as a long standing professional in the business and having just reviewed a book about the Chinese Laundry business in the US I can vouch for her adequate research and knowledge of the times first hand.
The main character Grace is a wonderful creation, confident but not overly so, naive but not overdone, good and honest but realistically so. The name cannot have been chosen randomly. This is a great book, not just for its historical value but for the story and its characters as well.

11 thoughts on “Arletta Dawdy – “Huachuca Woman” and “By Grace””